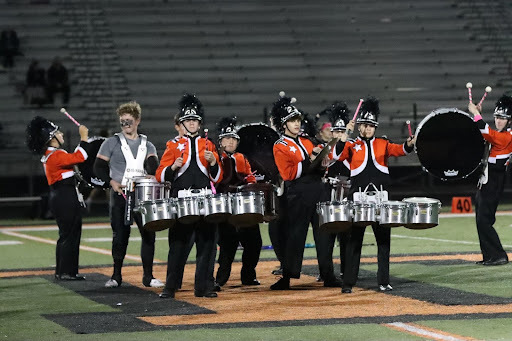 Imagine marching on a 100-yard football field in front of hundreds of people. That’s what it feels like to be in the Tecumseh High School Shooting Stars Marching Band. The THS band department offers two different types of band: jazz band, and symphony/marching band.

The school's pride and joy, however, is the marching band, which has a total of 81 members. During halftime of the THS football games, you can hear three distinct “Stadium Anthems” picked out by TPS band directors Kellie and Joseph McInchack, and conducted by drum majors junior Aidan Kennedy, senior Morgan Andrews, and senior Izaac Morrison (pictured below from left to right). 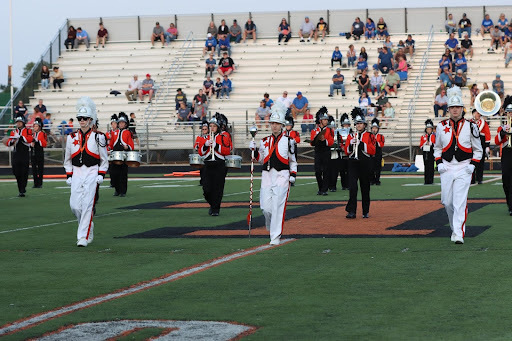 This year, the songs that were chosen were Sweet Caroline, Don’t Stop Believin', and Seven Nation Army. When determining how to choose featured songs, Mr. McInchak stated, “Mrs. McInchak and I collaborate on all of our show themes, as they also become the theme for our first concert of the year- Band-O-Rama. This year we wanted to really get the crowd's attention, and the ‘Stadium Anthems’ theme was the result.” When asked if they would be accompanying the football team during playoffs, McInchak responded, “Yes! We are looking forward to an extended marching season as we support Coach Dolson, our varsity football team, and their historic undefeated season!”

Band-O-Rama (pictured above) is the band department's first concert of the year. Each band gets a chance to perform and the concert takes place in the dark with the only light coming from instruments decorated in glow sticks, and drum sticks lighting up to the beat of the song.

Reflecting on how the band prepares for the enormous task of performing in front of tons of people, McInchak stated, "We are what we repeatedly do. Excellence, therefore, is not an act, but a habit. I try to always keep the end in mind as we prepare in class, and I am constantly telling students to practice the way they want to perform.” On average, the amount of time it takes to learn a piece of music is about two months. The next band concert will take place Wednesday, December 14 in the THS cafetorium. The Shooting Stars Marching Band recently performed at the annual Christmas parade on Friday, December 2 in downtown Tecumseh.

This year, Andrews, Kennedy, and Morrison led the band to a successful victory in not only their marching season, but also in the Lenawee County Marching Band Festival as the Shooting Star’s 2022 drum majors. Andrews commented on the band’s performance this year, stating, “This year our band has really stepped up in every performance. Every time, we choose to make something better than our previous shows. Now that the season is almost done, I feel we are at our prime marching abilities!”

Andrews shared her feelings about the band, commenting, “The best part of being in band is definitely all the close, tight-knit relationships and friendships you make along the way. I’ve made some of my closest friends in band and it’s been the absolute best time in my 4 years of high school. Our band is such a safe space and we get to really just be ourselves and make music together! I love it!” If you are looking for a class to learn to play an instrument, read music, or get a good leg workout, then band is the place for you!