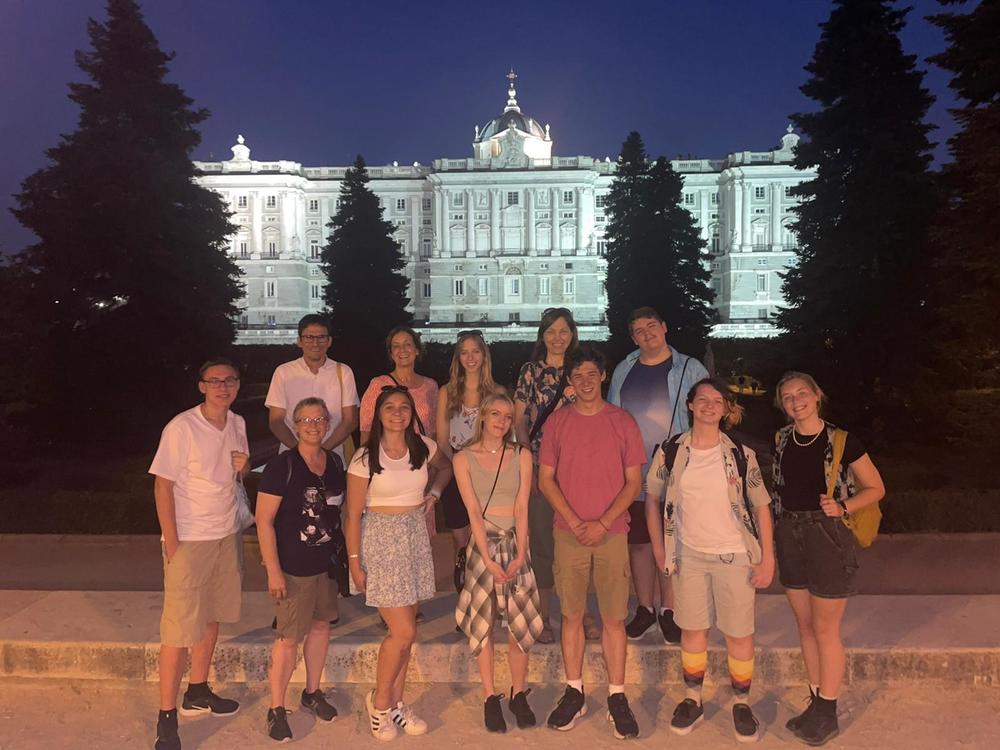 This story was originally published on Saturday, August 13, 2022. The article was written by Domenico Chiappe for 'El Correo' newspaper in Spain. The story was translated by former THS foreign language teacher Rita Cuevas. It was edited for clarity by Vic Pratt.

It is summer vacation; their first contact with the Salamanca culture began in the restaurant La Morcilla where they ate hamburgers made of Iberian pork. They are eight teenagers from Michigan between the ages of 15 and 17. They are Brooke Zimmerman, Aiden Gero, Bree Small, Billy Yenor, Xander Olney, Samy Cooper (who traveled with her mother Kathy), Eliza Longabaugh, and Redd Braun, and they live in Tecumseh, a city of fewer than 9,000 residents between the Great Lakes of the United States. The majority of the students study at the local school, where many have already finished high school and are ready for their commencement into college.

In the group, there are two vegetarian girls. They are served gazpacho as a traditional meal, along with salted vegetables. “We liked the hamburger; it was very good,” said Billy. “I preferred the bun,” seconded Eliza. 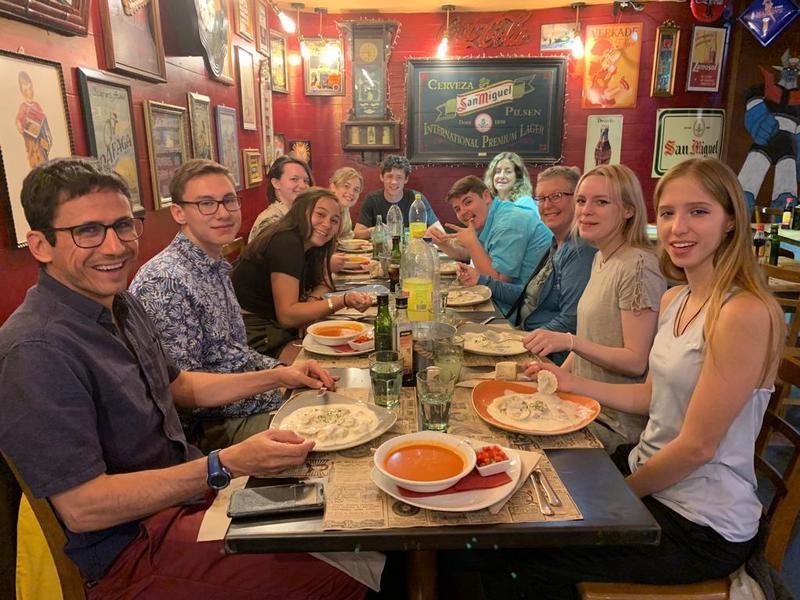 The itinerary was chosen by two teachers, Karen Arnold, who teaches World History, and Christine Obeid, who teaches art. “Spain? Why not!” said Karen, who contracted the tour services of WorldStrides. “Also, one of the students has selected to study Spanish as a second language, and I just fell in love with Portugal a while back, and so after this, we are going to Oporto and Lisboa.”

They will stay for two nights in Salamanca, which is really one full day. They will be staying in a hotel Plaza Mayor, where they will begin their tour through the city the following morning. Casa de las Conchas, Universidad, Cathedral”. 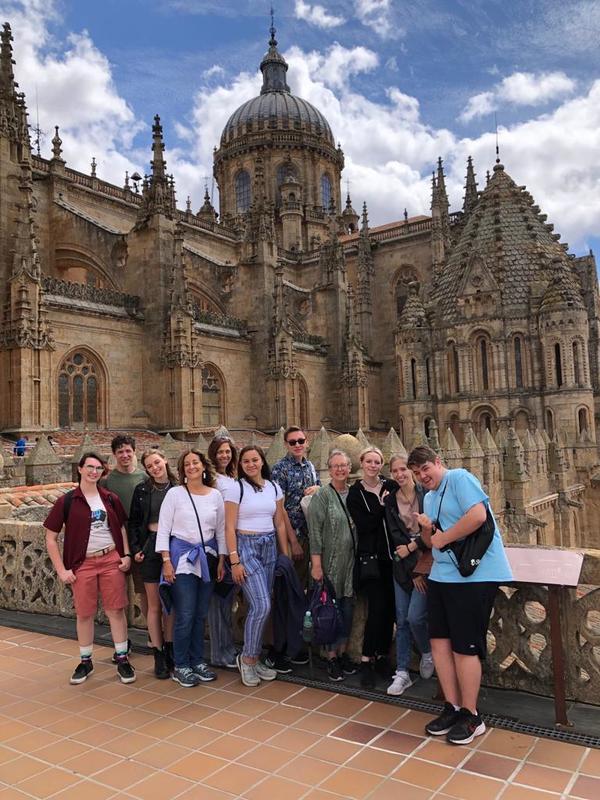 “In America, everything is new, and in Salamanca, we're just impressed with everything,” shared the astonished Redd, who is the one who would like to study Spanish and speaks with a certain ease and confidence. “It is just so beautiful that it is going to be hard to return home. The stone buildings here are beautiful, while in my country, they are just walls of plastic and glass.”

From the Plaza Mayor, they advance in an orderly way, without barely a sound, and head toward an internal courtyard and marvel at the frescoes of the cupola “Cielo de Salamanca'' where the local guide, Carmen Elmo, leads them. “I alternate information about the city with a historical and global context,” she explains. Close to her, Billy, who aspires to study nuclear medicine, shares that “Spain is purer than America, where we just mix everything together. [The Spanish] know how to uphold the culture, the tradition, the identity. Salamanca maintains the purity of their language, and here we can understand Spain's influence on the New World." 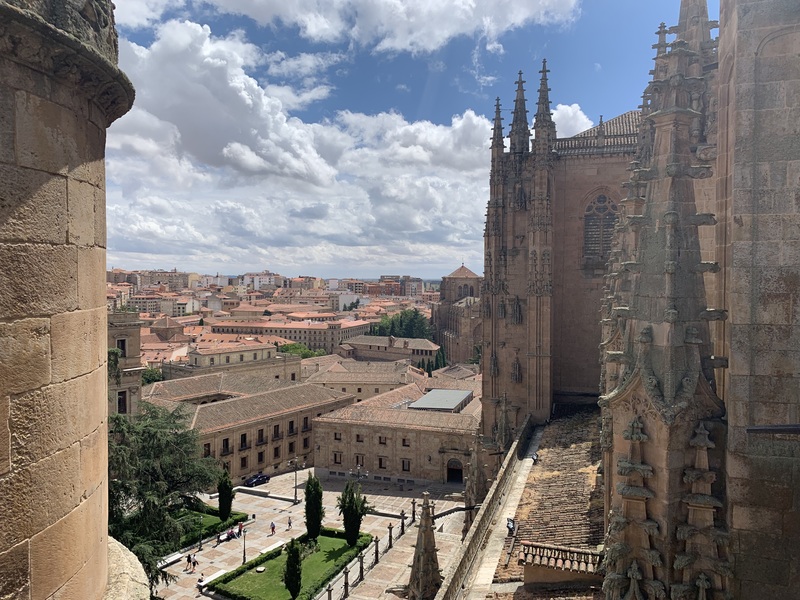 There is homework. During the trip, and depending on the location, they do particular educational activities. It can be a cooking practice or an oil painting. In the city of Tormes, they will prepare a debate to follow dinner about the Spanish Civil War. Each one will have to take a position on it—Republicans, Rebels, the Catholic Church, farmers, anarchists, communists. To get into their role, they received a profile with eight points about their respective position at the front. It describes, in a very simplified way, “how is my life,” “what are my interests,” and “why am I willing to fight.” Each one has to defend their ideas and positions. 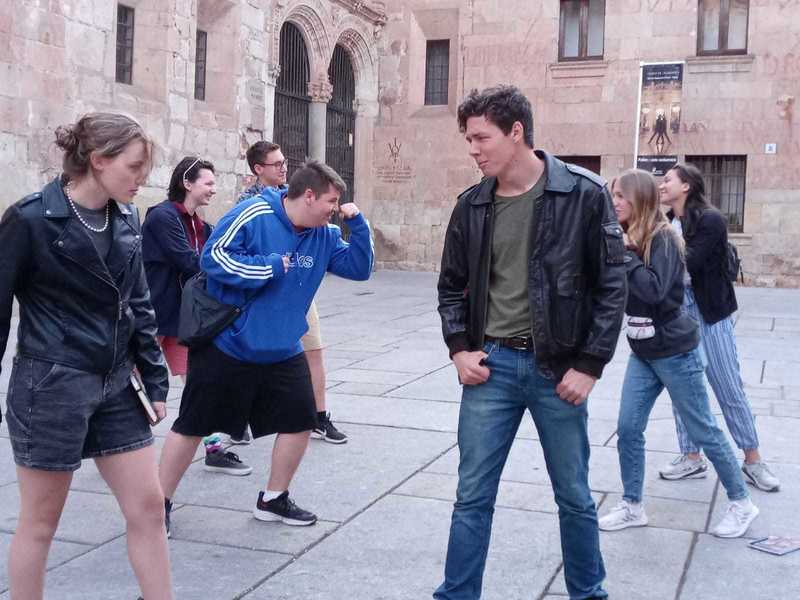 In the meantime, they are classmates who continue to be fascinated by the “beauty” of the architecture and the red stone of this tremendous historical area. “I want the kids to love traveling so that they continue after this. Here they behave well; they never give us problems,” assures Karen. “It is a vacation their parents pay for, and they choose; they are here because they want to be, and they are very interested."

Outside the cathedral, they look for the “astronaut” of the Portico. Samy covers her mouth and exclaims, “Oh. Oh,” and then laughs. Xander takes photos of his friends. He is the only one with a camera. Others point with their phones, although not quite like the usual tourist. They don't behave themselves like hunters of the imagination, like those photographs found in museum brochures. 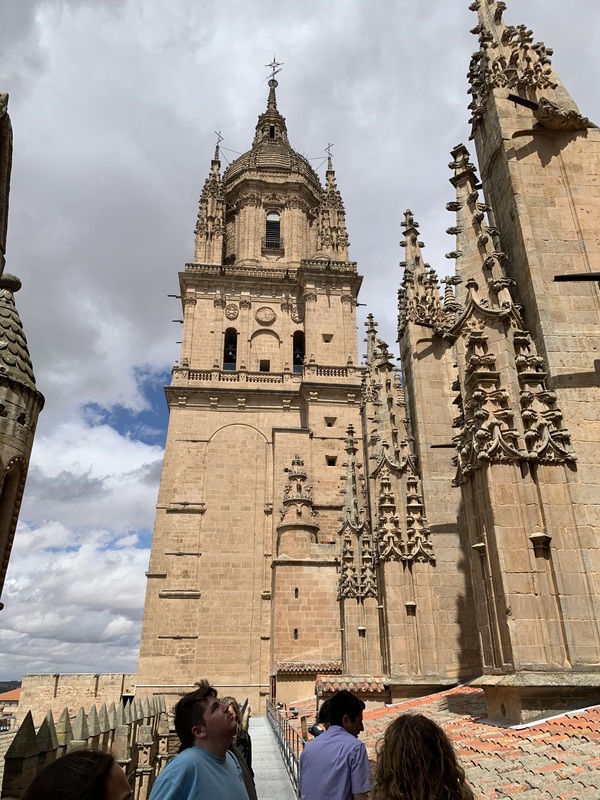 “I find the architecture interesting,” confesses Xander, 17 years old, who jokes about his height -- around 5 foot 9 -- the doors which hit his head as he passes through with the balance of a dancer.

“More than the Gargoyles or the adornments, whose profiles are outlined and captured in the rock. It seems incredible to me the necessity for memory to endure, to perpetuate it in stone, precisely where people will look at it,” says Xander. He wants to be a teacher or have a career that is in front of people.

During the tour, they are respectful, silent, and listen to the guide. “The new part is really not that new,” explains Carmen. “The new part here would have been done in the sixteenth century. This was one of the first Universities -- from over 800 years ago."

The group climbs stairs. “Does anyone have vertigo?” asks Karen. No one raises their hand; they just keep climbing. There is an interior lookout from where you can see and appreciate the inside of the Temple. The explanation makes Brook pose with her arms flung out to form a cross with her body. “This was how the ancient church was.” Next, Xander comes to her side. She lowers her right arm; he raises his. Shoulder to shoulder. “The expansion was like this,” indicates Carmen. “You are very kind,” they joke with Brooke. 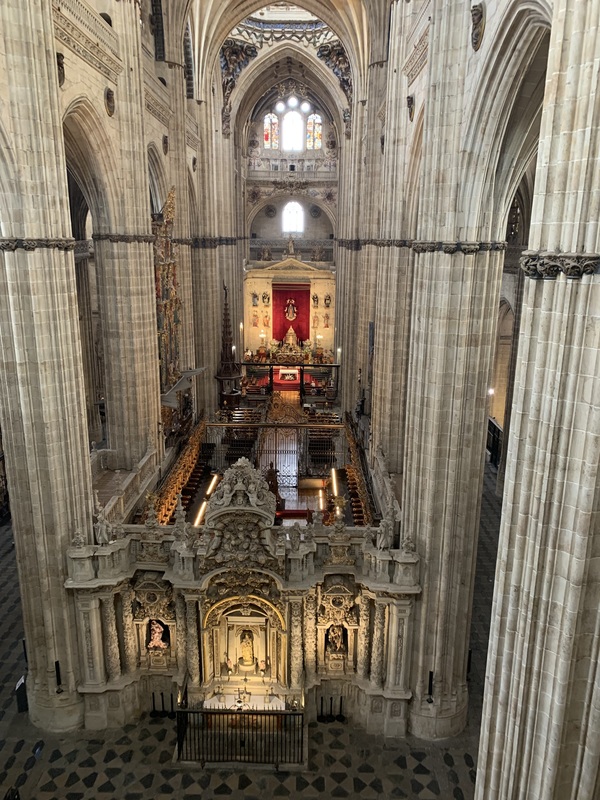 More Spiral stairs. Great views. From the Terrace, the Tormes River. Bree gets dizzy and withdraws. One of her professors accompanies her to the plaza, and they sit on a bench in front of the mosaic arena of color, with the city's shield behind them.

They have the afternoon free. The schedule allows them to explore the city center in smaller groups based on specific interests. Billy, Brooke, Samy, and her mom wander through the city center. They returned to the periphery with their urban buildings. “Definitely, I will be back,” assures Billy. They buy souvenirs in the stores to give to family members when they return. The fan is the most solicited. Another group decides to use this time to prepare for the debate. The afternoon is somewhat cold and cloudy. Some raindrops threaten to fall, although it doesn't rain. This night, the Civil War will be debated at the Plaza Mayor after dinner.